CLEVELAND, TN – The 2022 Leadership Cleveland Graduation and Alumni Association Scholarship Luncheon was held at the Cleveland Country Club, where 17 professionals graduated from the program.

“Becoming a great leader is a lifelong journey,” said Henderson.

Henderson serves as Executive Director for Volunteers in Medicine (VIM) and has spent much of his professional career in some component of leadership, with a focus and passion for healthcare and community betterment. An alumnus of Leadership Cleveland, in addition to four other Leadership programs, he is a recipient of multiple professional awards and is highly involved in community boards and organizations.

The Class of 2022 nominated Brad Perkins, financial advisor at Raymond James & Associates/Cooper & Cooper, to speak on behalf of the class at the graduation event.

In the weeks leading up to his speech, Perkins polled the class by email, including class favorite memories and things learned. Perkins speech included both funny and serious memories, and things learned from many classmates.

Also included in Perkins’ email, he asked classmates how they would respond to someone thinking of joining Leadership Cleveland and included many of their answers in his speech. The most notable response being, “do it!” Though, many responses were more eloquently worded.

Classmates agreed that Leadership Cleveland taught them a lot about aspects of Cleveland they otherwise would have not come into contact with, such as inside factories, the Wastewater Treatment Plant, lawmaking and government organizations and more.

For more information, contact Tasha Sullivan at Tsullivan@clevelandchamber.com or 423-472-6587. 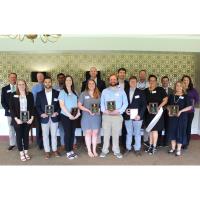